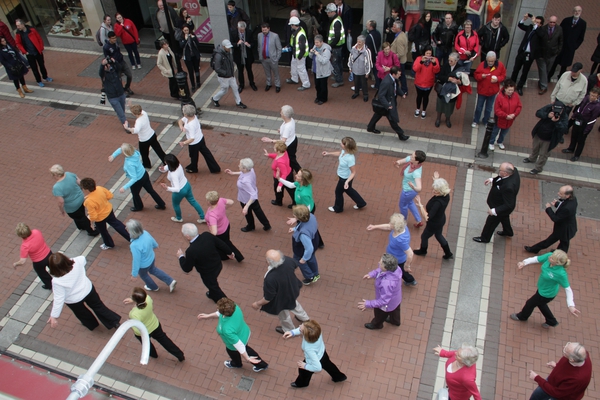 Members of Older People’s organisations and friends mark European Year of Active Ageing and Solidarity between the Generations on Dublin’s Grafton Street…Europe Day 9 May: Celebrating the older generation..Today, 9 May, is Europe Day and this year it’s all about the European Year of Active Ageing and Solidarity Between the Generations. ..The celebrations kicked off with a flash mob of older and younger people dancing together to music from a live swing band in Grafton Street in front of Bewley’s Cafe…A video of the flash mob will be available later today on youtube: http://www.youtube.com/user/EUIRELAND..This year’s Europe Day celebrates the concept of Active Aging and Solidarity between Generations by turning stereotypes on their heads…Barbara Nolan, Head of the European Commission’s Representation in Ireland said: “By challenging the stereotypes which lead to discrimination against older people, older people themselves are also challenged to redefine their own roles. The fact of the matter is that the older people in our society are a valuable but often untapped resource.”. .Celebrations went on with a free open doors event in European Union House. Minister of State for European Affairs, Lucinda Creighton T.D., and Members of more than 20 voluntary and public bodies involved in Ireland ‘s year of Active Ageing attended. Live music was provided by The Swing Cats and snacks from EU Member State embassy kitchens were served. . .For more Information regarding the European Year of Active Ageing and Solidarity Between the Generations in Ireland see:.http://www.activeageing.ie/ . .