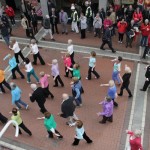 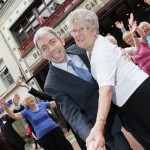 END_OF_DOCUMENT_TOKEN_TO_BE_REPLACED

Customers can purchase pins or trolley coins at all McCabe’s Pharmacy stores with all proceeds going directly to the Cystic Fibrosis Association.

Screening was introduced by the HSE in July 2011 as part of the standard ‘heel prick’ test given to all newborn children. Early diagnosis is crucial in giving babies with CF the best possible start in life and greatly benefits their long term health. Since July 2011’ 25 babies have been diagnosed with CF. It is estimated that the average number of diagnoses per year will be around 50 babies.

CFAI are calling on members of the public to support ‘65 Roses’ Awareness Week by organising their own local event in support of the national fundraising objectives.

Martin Cahill is a Fundraising Manager with the Cystic Fibrosis Association. He is encouraging people to make a donation. “With the welcome increase in life expectancy of people with CF over the years, the demand for our service has also increased dramatically during this time. With little Government assistance, we would ask people to support our work in improving the quality and quantity of life for the 1100+ CF patients in Ireland”.

The Cystic Fibrosis Awareness Week runs from 13th April to the 20th April. You can donate online at www.cfireland.ie or at any McCabe’s Pharmacy branch nationwide.

Lensmen created brochures for an exhibition from the European Union Representation in Ireland entitled “‘Then and Now’…snapshots of change in the EU years”.

They also did brochures for Sammon Group… David Markey (left), who was presented with the Lifetime Achievement award at the Guild of Agricultural Jounalists Dillon Lecture in Dublin on Friday night. Also pictured is Mike Wilson, president of the international guild of agricultural journalists, and Larry Sheedy. New research finds that over 1,200 older people die of cold-related conditions each winter.

Age Action is urging the Government to reverse cuts to the free gas and electricity units for pensioners, amid growing concern at the severe hardship which the cuts will have for the most vulnerable of older people this winter.

The call came today as the older people’s charity launched an appeal for the public to support its petition for the reversal of the cuts, which commenced in September. “This is literally a life and death issue for hundreds of older people who will struggle to heat their homes to a safe level over the coming months,” Age Action spokesman Eamon Timmins said. “While resources are tight, we all have a responsibility to protect our most vulnerable citizens from cuts which will cause harm and even death. We are urging the public to show their concern by signing the petition.”

Age Action used the launch to reveal new research on the impact of cold weather on older people Ireland. Research on fuel poverty and older people by the Dublin Institute of Technology and the Institute of Public Health — funded by CARDI and due to be published in the coming weeks — shows that during the winter of 2006/7 there were 1,281 excess winter deaths*. Of these, the vast majority were older people (1,216 were aged over-65).

The new research highlights the scale of the silent suffering being experienced by older people. In response to a questionnaire earlier this year, almost a quarter of respondents (24%) said their homes were âtoo coldâ and more than half (51%) went without other necessities to pay their fuel bills.

“The Government’s decision to cut the free gas/electricity units by between 20% and 25% is going to make life much harder for the most vulnerable of older people,” Mr Timmins said. “In particular, we are concerned about older people who live alone, on low incomes, in older (and poorly insulated) homes, and who often have poor health or a physical disability. If these people struggled last winter to keep well and warm, what does the coming winter hold for them?”

Age Action also used yesterday’s petition launch to publish their pre-Budget submission for the December Budget. Fuel poverty is one of five key issues addressed. The others were:

Income – 10% of older people in Ireland live on incomes deemed to be in poverty. Despite falling inflation over the last three years, the cost of key goods and services continues to rise. Their pensions are also under increased pressure from a variety of new charges. We are calling for the State Pension and welfare payments to be protected.

Health – There is a need to protect community-based health services (eg home help and home care packages) which older people are dependent on but which have experienced major cuts in recent years. The universal health insurance scheme must provide adequate basic care. Adequate levels of funding must be provided for the Fair Deal scheme.

Employment – With an ageing workforce and changes to the elibiligity age for the State Pension from 2014, FAS must plan for, and deliver training for older workers.

A copy of the pre-Budget submission is available here.

*The excess winter death rate deaths in the four winter months, compared to an average of the other eight months in 2006/7. These are the most recent years for which accurate data is available.

The Principal Investigator on the DIT/Institute of Public Health’s Fuel poverty older people and cold weather: An all-island analysis is Professor Pat Goodman. He is available for media comment at 086-3571843.

Pictured at the Age Action appeal were left to right:

Thursday 20th October, 2011 – EirGrid Group will have a key role in helping to “re-energise” the economies of Ireland and Northern Ireland, it was stated today at the Group’s Annual Customer Conference in Dundalk.